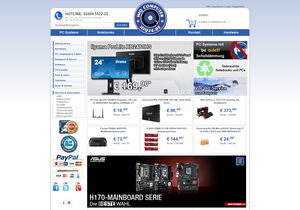 I never had problems with HIQ until I ordered a gaming pc.
The gaming pc was poorly built and I eventually had to rebuild the system to get most pins connected.

Seems my motherboard does not have enough room for my HDD+SSD + DVD
oke i dont use CD/DVD so im fine after installing windows.

contacted HIQ: superfast response and my warranty was fine and there were no problems.

Then the problems began.
day 1:
Installed windows and rebooted the pc, the bios was corrupt. I had to reset the bios completely because the current install was corrupt. ok that can happen I also work in ICT but its simply annoying.

day 2:
Then my computer wouldnt start giving me A2 and B2 messages and finally fixed that problem.

day 3:
Finally everything was installed, installed the drivers and the pc worked perfectly.

day 4: the computer turns on but doesnt boot. then I couldnt turn on the computer at all.
then the computer would turn on at random times in the middle of the night.
I can shut down the computer by holding the power button but i cannot turn it on manually. it just randomly turns on. well at least i noticed the fans worked.

day 5 till now:
trying to reach customer service. I get no response trough email. Contacted them by phone and i called the wrong store. Called the other store (other store also manages the online store) and after a conversation of 30 minutes they promised me they would call back.

and I never got a call or mail since.

So the shop is awesome if your product works. but when the product is broken they ignore you untill your 14 day return policy is over.
It's unprofessional and horrible to be ignored this way. the computer cost 1200 euros and I cannot buy a new one until the broken one is refunded or replaced.